The July 2017 Zumper National Rental Report lists Seattle as the eighth most expensive rental market in the United States, joining San Francisco, San Jose, Los Angeles and Oakland as the west coast representatives of the 10 most expensive cities for renters in the country.

This comes as Seattle is in the midst of the most significant construction boom in its history. More new apartments have come on the market in Seattle in the past five years than in the previous 25 years — combined. Still, the increased supply has yet to make a dent in demand or prices. According to The Seattle Times, Seattle’s rents have increased by 64 percent since 2010.

King County recently imposed a 35 percent increase in property taxes in the Emerald City. Additionally, a new statewide property tax will go into effect for 2018, which will add a tariff of 87 cents for each $1,000 of value to homes in Seattle.

Combined, these levies will add up to make Seattle’s property taxes among America’s steepest. So far however, this has done nothing to slake demand either.

Seattle is the fastest-growing large city in the United States, so perhaps this is to be expected. With long-time tech employers Amazon, Boeing and Microsoft now being joined by the likes of Facebook and Google, the area is attracting highly skilled people who command significant salaries.

People with lots of money to spend means lots of money will be spent and the economy will expand to accommodate those expenditures. 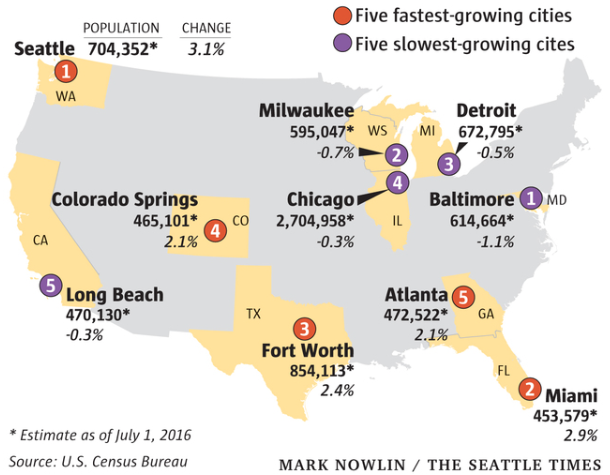 Contributing to this, the area’s geography (situated between two large bodies of water) provides limited ground on which to build homes, so supply is restricted. 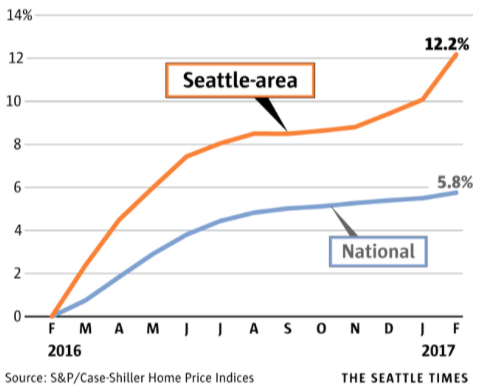 High home prices can also be an effect from the recent surge in Seattle Real Estate development, which you can read about here.

The good news in all of this is some of the priciest areas are stabilizing, Downtown Seattle, Fremont, Queen Anne/Magnolia, West Bellevue, Redmond and Mercer Island logged among the lowest annual increases, while more affordable neighborhoods have seen increases in excess of 10 percent.These include First Hill, Central/South Seattle, Edmonds, Mukilteo and Burien.

The most highly regarded neighborhoods have become very pricey, so re-gentrification of what have traditionally been some of the city’s less desirable areas is taking place, spreading the wealth around the city.

With all of that said, when you consider Seattle is also a wonderfully quirky place in which to live, it’s easy to see why the city is among the top 10 most expensive U.S. rental markets.

Interested in renting your property out in the Greater Seattle Area? Get a free rent estimate to see what your property is worth.